First introduced in 1985, this trailerable trimaran quickly became a seminal boat in the world of multihull sailing. Designed by Ian Farrier, a Kiwi who emigrated to California (by way of Australia) with the specific goal of perfecting his concept of a production-built trimaran with folding amas, the F-27 is both an excellent high-performance coastal cruiser and a competitive one-design racing machine. During a 12-year production run that ended in 1997, a total of 453 hulls were launched, making this by far the most successful boat of its type to date. Arguably, the boat is still in production, as Corsair’s successor design, the F-28, though it has a rotating wing mast and is generally more sophisticated, is quite similar and is built with much of the same tooling.

The F-27 is certainly not a boat for anyone interested in roomy accommodations. Though the body of the main hull flares out a great deal above the waterline to maximize interior space, the layout and furnishings are cramped and strictly minimal. There is only sitting headroom, except under the pop-top roof near the companionway where the simple galley is located. Berthing is limited: in the tiny aft cabin there is a narrow double berth, there are two narrow settee berths in the saloon (separated by a small removable table), plus there’s a tiny berth suitable for a small child in the forepeak.

Even a couple sailing alone on this boat will want to spend much of their time, weather permitting, hanging out in the cockpit or on the wide nets between the amas and the hull. As such, the F-27 serves best as a weekend cruiser with perhaps occasional stints aboard as long as a week or two. Though several of these boats have made ocean passages, they are not really suitable for long-range bluewater cruising unless you are something of a masochist.

Nicely finished saloon on a F-27

A less nicely finished saloon, but with the berths all filled in

The forepeak. The small single berth forward is rarely used as such, due to the close proximity of the toilet

What the F-27 lacks in amenities and comfort it makes up for in cruising range. Because it can be trailered, the boat can get to all sorts of places–inland lakes and distant shorelines, for example–that would otherwise be out of reach. And because it is so fast, it can cover a lot more ground than most boats once it is in the water. In a little speedster like this you can potentially travel over 100 miles during a long daysail. If you don’t really care about sailing fast and aren’t interested in taking advantage of this sort of capability, this is definitely not the boat for you. But if you want to both cruise and race, you should give the F-27 a hard look. Many people cruise these boats, and there is a very active one-design class.

Folded up and packed to travel on a trailer. You can easily expand your cruising range by simply hauling the boat to a new body of water

As originally conceived the F-27 carries no bowsprit and flies a conventional triangular (or “pinhead”) mainsail hoisted on a fixed aluminum mast. In 1996 a “formula” version of the boat was introduced with both a square-headed main that carries a lot more roach and a fixed bowsprit for flying a big screecher or asymmetric spinnaker. Many of the earlier boats have since been updated with formula rigs, as they are both faster and easier to manage.

On the whole, the boat is not hard to sail shorthanded. The self-draining cockpit is quite small with the mainsheet within immediate reach of the tiller, which extends from the transom over the top of the short aft coachroof and under the raised main traveler. Other controls, likewise, are right nearby. If anything, unless you can convince idlers to stay clear of the cockpit, the boat is harder to sail with a big crew. 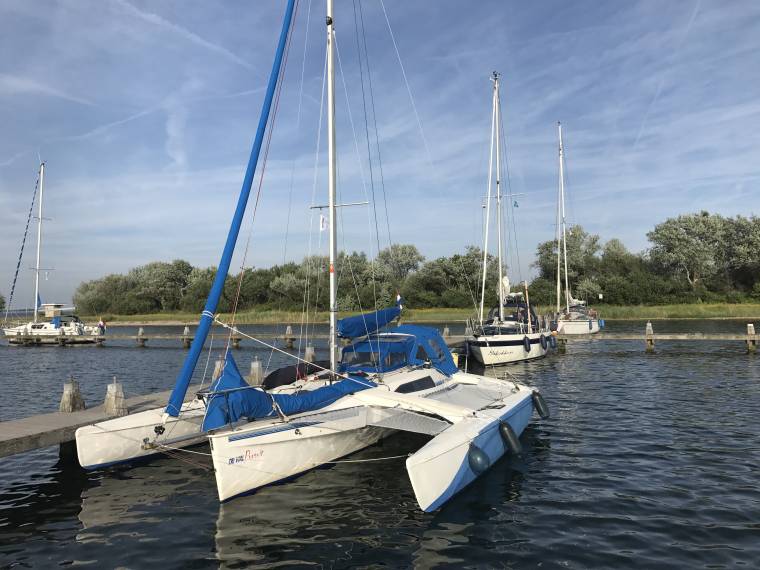 There is a large central daggerboard to hold the boat to weather and unlike many multihulls the F-27 is rather closewinded and makes excellent progress to windward in light air. I once spent a delightful hour beating up a very narrow channel in an F-27 in a mere whisper of breeze and had no trouble maintaining apparent wind angles of 40 degrees. In a moderate breeze the boat points as high as 35 degrees apparent and chugs along at 8 knots no problem. With the wind on the beam, if you press hard with a spinnaker up, you can get up to 20 knots, which is a thrill and a half in a vessel this size.

If there are kids aboard and you don’t want to terrify them, just douse the headsail and the boat still sails well under main alone. Or stash them all in the aft cabin where you can keep an eye on them while steering and let it rip anyway.

A formula-rigged F-27 sailing to windward

The F-27’s construction is structurally impeccable and thoroughly modern. The S-glass laminate is set in epoxy resin with a PVC foam core to reduce weight and increase stiffness. Kevlar and carbon fiber are used to reinforce high-load areas, and all components are vacuum-bagged when laid up so as to minimize voids and achieve uniform resin saturation. The patented folding ama arms are well engineered, with few if any reports of failures or problems. The amas can be folded up while motoring through the water, which is a great convenience when pulling into a marina berth. When launching the boat from a trailer it takes about 30 minutes for an experienced owner to step the mast and set up the rig without assistance. Because they are so well built these boats are not cheap given their size, but if you factor in the savings realized from being able to store the boat on a trailer, they are in fact quite affordable over the long run.

Systems are primitive and therefore are easy and inexpensive to maintain. Auxiliary power consists of an 8 or 9 hp outboard engine hanging in an offset engine well at the stern. The stove is usually a simple two-burner non-pressurized alcohol rig; the ice box (never mind any kind of refrigeration) is a loose cooler dragged aboard and stowed in a convenient nook or cranny. The boat has a 12-volt electrical system powering a few lights and instruments and probably requires some extracurricular charging from a solar panel or two if used very much. The toilet is often nothing more than a porta-potty stashed under the forward berth. To those who value comfort and convenience all this no doubt sounds unpleasant, but to those who enjoy sailing fast and cherish simplicity it should seem like heaven afloat.

I remember my first sail on a multihull. It was 1963 and the boat was a 17-foot Cougar Cat owned by some friends. At that time there were a few one-design cat classes starting up but none really caught on until Hobie started building his cats. But cruising multihulls would remain scarce for many more years. There were various designers promoting catamarans and trimarans but they were mostly aimed at selling plans to home builders. The multihull world was a bit “cultish” and most certainly far from mainstream.

My original SAILING review for the F-27 was written in 1991. In six months, 100 F-27s had been sold and they would go on to sell a total of 453 of the trimarans before production ended in 1997. I am lucky in that my buddy Doug on the next beach has an F-27 and I have sailed with him several times. I know this boat. Is it a good boat? Given how many days a week Doug sails his boat, I’d have to say this is a great boat. It’s fast and very easy to sail. Doug singlehands his F-27 almost all the time.

New Zealander Ian Farrier designed the F-27. Ian had been working on “folding” trimarans since the early 1970s, and in 1975 Ian got the patent for the Farrier Folding System. I suppose you could consider the fact that the F-27 folds down to trailerable beam the key to its success. Maybe. Being able to trailer the boat is important, but you also have to look at the performance of the F-27. In 1984 in its first official race, the Two-Man Round Catalina Race, the F-27 set a course record. In 1987 they had a repeat win in the same event. The speed on the F-27 attracted a lot of sailors looking for lots of boat speed in a small and trailerable package. From my own experiences sailing the F-27, 14 knots is commonplace and almost a yawn. The feeling of speed is so subtle on the F-27 that I find myself looking at the wake just to convince myself that yes, we are going that fast.

All of a sudden, multihulls, in large due to the meteoric success of the F-27, were “normal.” Production builders got in the game to fill the need. In time the F-27 would morph into the F-28 using much of the original F-27 tooling. The F-27 design was enjoying a second life. Other folding trimarans like the Dragonfly began showing up. Race organizers began adding multihull classes to major races.

To my eye the F-27 looks as current today as it did in 1991. When I read my 1991 review I get the feeling that I was not sure exactly how to deal with the boat. It’s a very good looking boat and I think that helped a lot to win monohull sailors over. It’s not a roomy boat. It has far less interior volume than a current 27-foot monohull. The fo’c’sle serves as the enclosed head. The cockpit is small but you tend to spread out on the trampoline when you are sailing. But interior comfort is not what sells the F-27. I think speed and trailerability sell the F-27.

The first folding trimaran I saw was a 40-footer designed by Bill Nightingale in about 1974. It was an awful looking thing with a mangle of aluminum tubing for struts. I can remember it sailing by me one day. A good friend of mine was standing on the weather ama with a very concerned look on his face. Midi file acoustic guitars. The ama was flapping up and down and looking like it could all come apart at any moment. The next time I took notice of the “VBT,” Variable Beam Trimaran, (we called it the “BLT”) was in a magazine and being promoted as a narrow monohull. The amas were gone. To my knowledge no boats were sold. For Ian Farrier it was different. His early work with the type in Australia paid off and there is no doubt in my mind that the term “folding trimaran” will forever be linked to the work of Ian Farrier.

Read Perry's other picks for the four most influential designs of the past 50 years here: