If you are referring to the built-in camera on a MacBook Pro then this implies you are running Windows via Boot Camp. If so then I believe normally this driver should be installed as part of the Apple Boot Camp driver pack.

However I would check and make sure you have the current Boot Camp drivers from Apple installed first. As part of this it should also have installed Apple Software Update in to your Windows so it can check for updates.

I use a Mac mini for Boot Camp so it does not have such a camera and hence I cannot check this.

The FaceTime camera is a USB device, in theory this means you can use Parallels Desktop or VMware Fusion to run Windows and 'share' the camera i.e. that USB device from the host Mac environment in to the virtualised Windows environment. 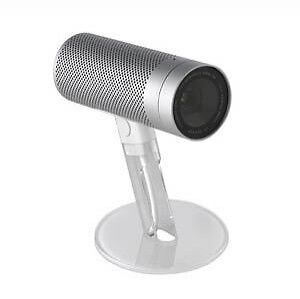