From its at the time state-of-the-art graphics, to its robust LAN multiplayer component, to its frequent use as a benchmark for graphics cards, Quake 2 built up quite the following. But the Quake II team rallied behind one art style, one art direction and story. We had better design, and we were focused. Adrian Carmack did amazing concept work on the Strogg creatures,. Be sure to check out Galitz's Instagram post and the new concept art of the Quake 2. Quake - hatchet (axe): A new thing to put in a futuristically themed fps afaik, though not all that original or cool. Quake 2 Rocket Arena?? 0 EVENT (q2gmmt3) Quake 2 Group Map Making Thingie #3 0 Event Q2 Group Map Making Project Thingie 1.0 6; game wont save any help? 0; New Quake II. Quake 2 Concept Art Project “I think one of the most important things was that the Quake symbol be incorporated into her costume,”Foley continues, “but especially onto the gauntlets. And it’s also on the back of her suit, which was a fun little touch that we added.

Mail has been fixed; you should now be able to confirm your e-mail address, watch pages, and the like.
Please report any issues on Discord.

Quake II is a sequel to Quake in name only. Instead of running through castles and blowing up knights, you run through orange-tinted futuristic buildings and blow up the best Borg wannabes late 1997-era technology could render. On paper it sounds pretty different, but in reality it isn't. 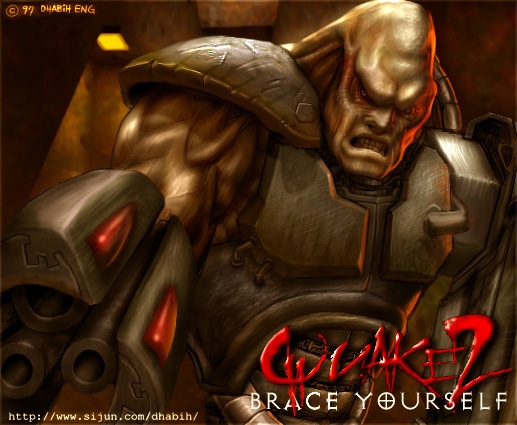 A model for a weapon named “FlareG” can be found in the game's files. When the model is opened up, it shows some sort of weapon with extremely incomplete textures. There doesn't seem to be any place where a flare gun would fit outside of possibly the Outlands level, where the player must signal an airstrike. Possibly because of the few uses it has, it was cut before it could get a proper texture job.

The official Threewave CTF mod that ships with the official Quake2 patches finishes the skin and retools the cancelled weapon's art to serve as a grappling hook.

Models for something called the “Disintegrator” can be found in the weapon models folder. When opened in a model viewer, it is the BFG 10K. The only difference between it and the regular BFG is that there is no pulling back the grip animation after firing it. This would make it a rapid fire-BFG. It was probably scrapped because the BFG is damn powerful enough already and making an upgraded version of the gun everybody knows is ridiculously powerful thanks to Doom would make the game stupidly easy. The Disintegrator re-appears in the Quake II official mission pack 'Ground Zero' as a multiplayer-specific weapon, but does not seem to be related in models (as the Nuke ammo was not re-used).

There is an unused world model for the Blaster. This suggests that you had to pick it up at one time instead of always spawning with it when you start. However, the texturing is very early, suggesting the idea of picking it up was cut early on. However, the model was finished later on, for the 3.20 patch that added weapon models for characters in multiplayer.

A model for ammo called “Nuke” can be found in the item models folder. There doesn't seem to be any sort of weapon it could fit for outside of maybe the scrapped Disintegrator.

An ammo model with very early textures named “mines” can be found. This was an early weapon concept found in the prototype, however, it has no use, and appears exactly as it does in the final release aside from having no entry in the item table or anywhere in the code suggesting that it was scrapped just after Q2Test was released. In Q2Test, Mines have an ammo & a weapon table entry, however the Weapon logic function for it is empty, leading to it locking up your weapon logic entirely.

An unused item named “Power Screen” can be placed in custom levels by level makers. It is a player usable version of the green screen the Brain enemy has. It was likely removed because the Power Shield does the same thing, but covers the player's whole body.

While there are no unused enemies, there are unused enemy animations that point to them being a bit more dynamic at one time.

An animation of a Berserker ducking is in its model file, but unused. It is used in the Nintendo 64 port where it will duck if being fired at by the Hyperblaster or Rocket Launcher.

An animation of the Berserker jumping and hitting the ground with its left arm can be found in its model file. The animation suggests that it would be able to jump and hit the player at the same time at one point in development.

An unused animation of the Enforcer moving his chaingun to his face in order to block something can be found. It was probably deemed pointless because he can already duck to avoid projectiles.

An animation showing the Technician's claws coming out exists. This is never played in the final version; all Technicians already have their claws out as soon as the map starts.

An unused marine entity that performs scripted actions. By default, they have a glitchy red skin, and are given a random name from a short list. Shooting one triggers a chat message yelling at the player for their bad aim. In order to be used, they need to be linked to a path of nodes and then triggered, which causes them to very slowly follow the path without proper walking animations. When they reach a node, they can either continue onto another node immediately or perform a task like attacking a designated target with their machinegun, or make a jump with configurable height and length.

A sound called bump1 can be found in the playermale folder. It sounds like the player brushing up against something while making a noise. There is no female equivalent, showing it was scrapped before they made the female sound set.

This is an alternative version of a used sound. Oddly, this is named with a .map extension.

This rattly machinery noise would probably be used for a small train.

This was later used in 'The Reckoning', however.

This sound exists in the Berserk folder, who only has a melee attack and doesn't fire anything.

Might have been intended for the Christian Antkow Easter egg in Boss2, or another Easter egg altogether. A different song is used instead.

An ammo icon for the Baster can be found in the pics folder. It seems at one time, the Blaster was going to have its ammo visible, but why is unknown. Maybe it had to recharge its ammo or you needed to pickup ammo at one time.

An icon that consists of a yellow ? over a red background can be found with the file name “i_fixme”. It is very likely to have been a placeholder for an item's inventory icon until the final graphic was finished. It's not unused though - you'll see it when you pick up John Carmack's head from a secret Easter egg area.

The Power Screen is an alternative power armor which only protects your front instead of all around you - this is exactly the same as the protection that the 'Brain' enemy has. It is fully programmed and functional, but never used in single player or any official multiplayer maps.

The manual has an unused image for a 'cloak' item, resembling the Power Screen/Power Armor. This was likely scrapped very early on as Q2Test has no trace of it.

The digital manual included with the initial CD release includes an unused picture of an item called a 'Scope'. Most likely it would have been used to zoom in from far distances. No traces of this exist in Q2Test.

The digital manual included with the initial CD release includes an unused picture of an item called 'Sights'. No traces of this exist in Q2Test.

Sprites for explosions can be found in the sprites folder. These are unused, as the final game uses models for explosions. Two of them are used in Q2test, though.

Before Quake2.exe gained an icon of its own, it installed a Q2.ico file with it. Later retail releases (updated to at least the v3.14 point release) has since updated the icon.