Players on the go withMinecraft Pocket Edition-- now simply just known as the Bedrock version of Minecraft -- used to get the short end of the stick in terms of features and additions. That's no longer the case, and the good news is that MCPE add-ons / mods are now officially supported in-game!

The bad news is that getting them installed and activated can be a chore because there's so much conflicting information as certain programs stopped working with later editions of the game.

Want to spice up your Minecraft experience with mods and add-ons? First we'll explain exactly where to go to install them plus how to get them working, then we'll leave you with our top 10 picks for the best Minecraft PE mods!

How to Install Mods in Minecraft PE

The process varies depending on whether you are using an iOS or Android device, and we cover both in detail below.

With either type of device, note that not all mods and add-ons will work with all versions of the game, and some mods are still floating around the net haven't been updated so they may not play well with Minecraft Pocket Edition.

Aside from version requirements, make sure to read the fine print instructions in any mod before downloading, as they may requireenabling experimental mode, have custom crafting recipes, or force you to travel to specific locations to get the mod functioning properly.

With any MCPE add-on, its highly recommended to start with a new world, as the mod may make substantial changes to your game (or even be incompatible with your current seed).

After following the specific directions for iOS or Android below, in the Create New World screen scroll down to Add-Ons in the lower left corner and select the corresponding resource or behavior pack for whatever mod you installed.

If You're Using an iOS Device

This process previously required using the Jailbreak app, but that's no longer necessary as add-on files can be launched in Minecraft for iOS straight through the Safari browser.

To get started, either head to the mcpedl add-ons search page here to search for a mod, or use our list of the top 10 below to go straight to the corresponding download.

When browsing on your own, keep in mind you are specifically looking for .McWorld, .McPack, and .McAddon files if you want them to work on your iOS device.

On the downloads page, skip the ads and choose the green download icon that lists the file size, then select 'open in Minecraft.'

You will know you did it right and chose the correct link if the 'import started' message appears at the top of your device.

If you don't want to go through this manual installation process that is typically flooded with ads meant to look like download links, the Add-Ons For Minecraft app automates the process with 1-click install.

However, keep in mind that the list of available mods through the app is reduced from what you get by manually browsing the mcpedl database.

If You're Using an Android Device

The mod installation process was previously handled through BlockLauncher, although that app isn't working for many Android users at this point in time (if you want to still give it a shot, you can grab it here).

Instead, there are two different ways to go about installing MCPE mods for Android.

Like with the iOS version listed above, the Add-Ons For Minecraft app offers 1-click install of a reduced number of mods and provides easy access to browsing mods straight from your phone.

If your device isn't compatible with the app or it doesn't have the specific add-ons you want, instead its time to go for the manual installation method, which will first require downloading the FX File Explorer app. Using a file management app makes it much simpler to find and apply your mod within an Android device.

After the app is installed, the process looks very similar to how it works on iOS. Download any mod that uses the .mcpack or .mcworld file extension, then head to the Downloads folder located in FX File Explorer.

Open the mod and select the option to import it to Minecraft Pocket Edition.

From there, switch over to Minecraft, create a new world, and choose the mod from the add-ons list in the resource and behavior pack settings in the lower left corner.

Ready to see what's available for Pocket Edition? Here are our favorite 10 mods!

Forget horses, or even zombie horses, because this add-in lets you ride giant ants! Travel to any nearby desert, savanna, or plains biome and keep your eyes peeled for different kinds of ants to spawn.

While those pesky small ants are just mobs to be dealt with violently (or avoided altogether), the big ants with green on their backs can be tamed and ridden with a saddle. If you really want to be the king of the ants, don't forget to throw some diamond armor on your tamed bug!

Big fan of The Walking Dead or the Dead Rising series? Well, now you can add way, way more zombie mayhem toMinecraft than was ever originally intended.

With this add-on installed not only are all undead much more difficult to kill, but they can come out during the day and will rapidly transform all villagers and even horses they come across into zombies.

For full effect, the add-on creator recommends using a custom map likeRuined City rather than a standard world.

Bringing a little (OK, actually, a lot) of The Sims to your Minecraft, Furnicraft throws in everything you'd ever need to build and decorate modern homes, and it can all be rotated for your perfect setup. Trampolines, laptops, swings, chairs.. You name, it's here for your villagers to use.

Similar to Furnicraft, the Modern Tools mod is more focused, giving you six specific modern day appliances that can be used in different ways. Want a refrigerator to store food? How about an electric stove to cook food?

Those are both included, as well as a water cooler (I hope you've got some office gossip to share while dispensing water!), a stereo system, improved beds and chairs, and even a PC.

It's hard to overstate the fun of this mod, which is really more a 'random mayhem generator' than a 'luck block generator.' Pig mobs are replaced with very Mario-esque question mark blocks and can be found all around the world wherever pigs spawn.

Go ahead and walk up and just smack that lucky block and see what happens. You might get a sheep, or a cache of awesome resources.. or you might get a three headed wither boss. The landscape may also explode in flames. How lucky are you feeling today?

Like all great relationships, villager love can now start with an offering of cake! Hand 'em over a few slices and watch the sparks fly as they start their own families.

Not into the domestic lifestyle? Hand over a villager some gold and you an now hire them as a bodyguard, then give them a sword or bow to make your own personal soldier!

Llamas, vending machines, resource drops.. yep, battle royale has now arrived for Minecraft! Ride the battle bus, grab a sniper rifle, and see if you can grab that victory royale.

Like the idea of other game genres colliding with Minecraft? You may want to take a look at the Dead By Daylighttotal conversion map over here as well.

Don't care for the look and feel of the Pocket Edition / Bedrock version of Minecraft? If you've extensively played the Java edition, you may want some of those elements back on your Android or iOS device.

With this mod, you get the best of both worlds, streamlining the UI and changing up the menu screens to be more like the game's PC version. 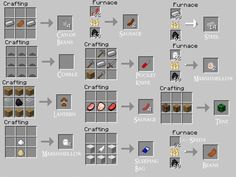 Survival mode just got a whole lot less deadly (well, for you) with Jimbo's Modern Weapons.

This neat mod turns the fishing rod into a shotgun, the bow into a grenade launcher (!!), the snowball into a fire grenade, and skeletons into enemy soldiers. With some iron blocks and a pumpkin, you can even craft an automated turret to take down mobs from a distance.

Oh yeah, this one's a big ole cheat. There's no two ways about it -- you are officially a Cheaty McCheaterson if you download this mod.. and that's OK.

With this mod enabled you can see through blocks to know exactly where mobs chests, mine carts, and even other players are hiding out. Never be in the dark again!

After getting to the area where your stolen laptop is, you pinpoint its exact location using WiFi. Second it uses GPS to triangulate the exact coordinates of your laptop location with an error of 5 meters or less. So there are absolutely zero chances that the thief will format/wipe it out. You simply command the balckbox which was wired in your laptop to activate its WiFi hotspot which you then connect to on your phone (remember this is your matrixblackbox wifi and not the thief’s Wifi) and it does this even if the thief has turned off the laptop. First matrix blackbox is a laptop tracking hardware wired into your laptop and that you control via commands and NOT software. Gps tracking software free for pc windows 10 full.

Got any other Minecraft Pocket Edition mods you recommend we try out, or found any in our list that aren't working anymore? Let us know and we'll get this article updated! And if you loved our mod list, check out our plethora of Minecraft seed lists filled to the brim with seeds to use in any version of Minecraft.